So, what happened the day the tree fell on our house?

We had just celebrated the Christmas Holiday with Tobin’s family in Houston.

We were still IN Houston the early morning that I got a text from my next door neighbor, Mayra. (please excuse any typos) 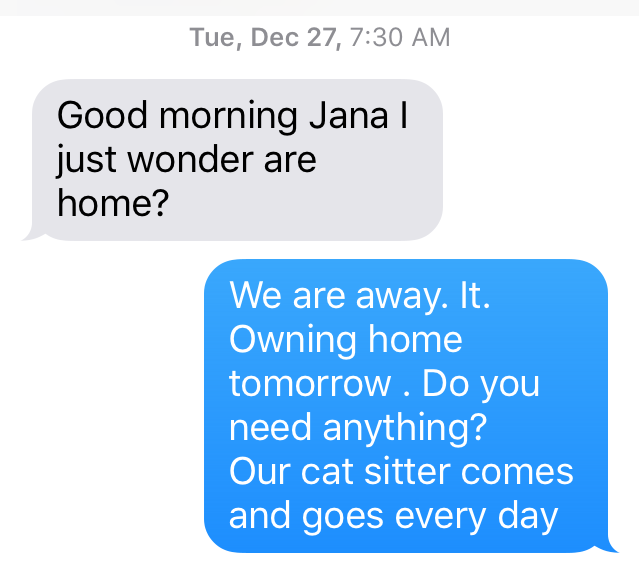 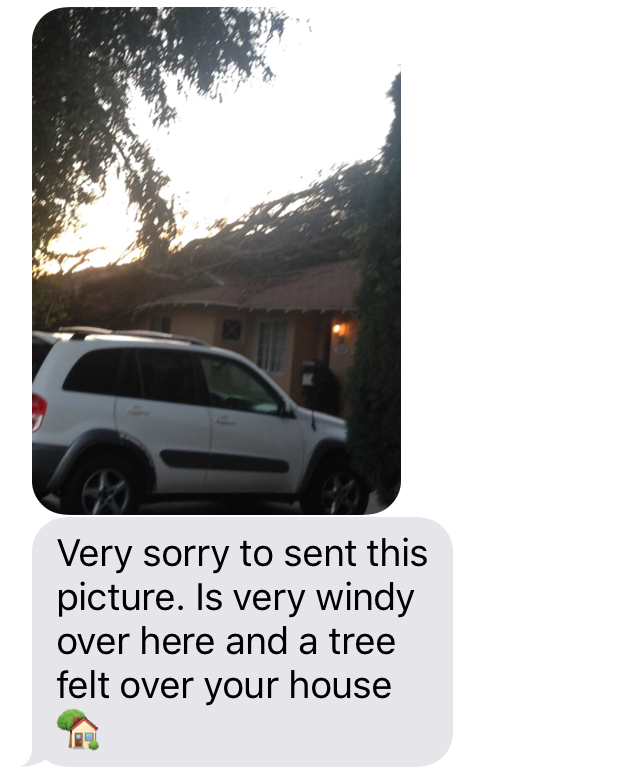 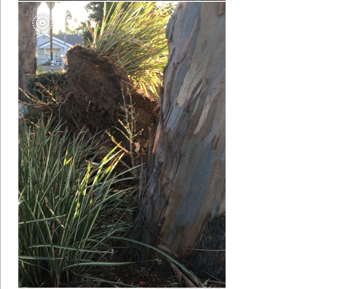 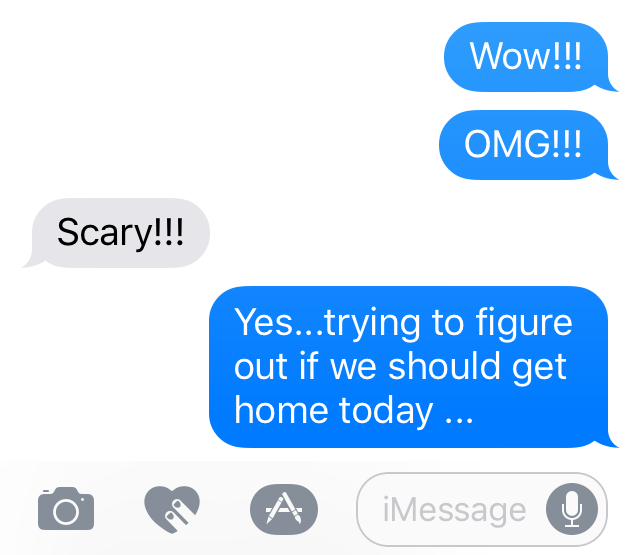 After a few speculative calls to the airline, again this is the week between Christmas and New Year’s, we decided the added expense of emergency travel was not going to help the situation.

There was nothing WE could do that could not be directed from a distance. We were certainly not going to lift that 70’ gargantuan tree off the house by ourselves. And even if we could, what would we do with it?

I wish everyone in crisis mode had as easy an answer as I did. Lucky for me, my highly skilled and highly resourceful insurance professional Alberta, over the years, has become one of my closest friends and I have her cell number. 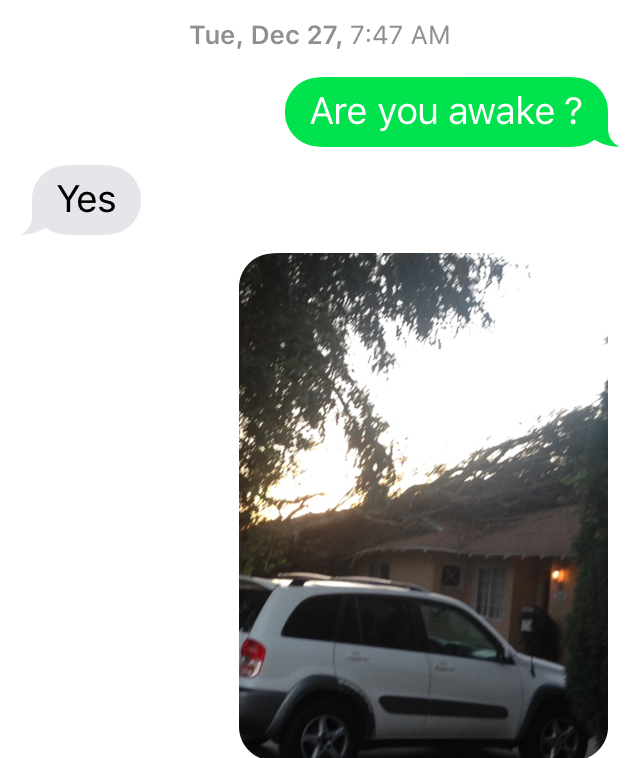 Ring, ring…(because there are no emoji’s to exclaim that sort of shock)

So Alberta called and I explained where the key to my house was hidden and how to turn off the alarm. Come to think of it, why did we not get a call from the alarm company? It was definitely big enough to trigger the alarm.  And what is a tree in your house if not an intruder? A wooden intruder.  It literally broke into my house. 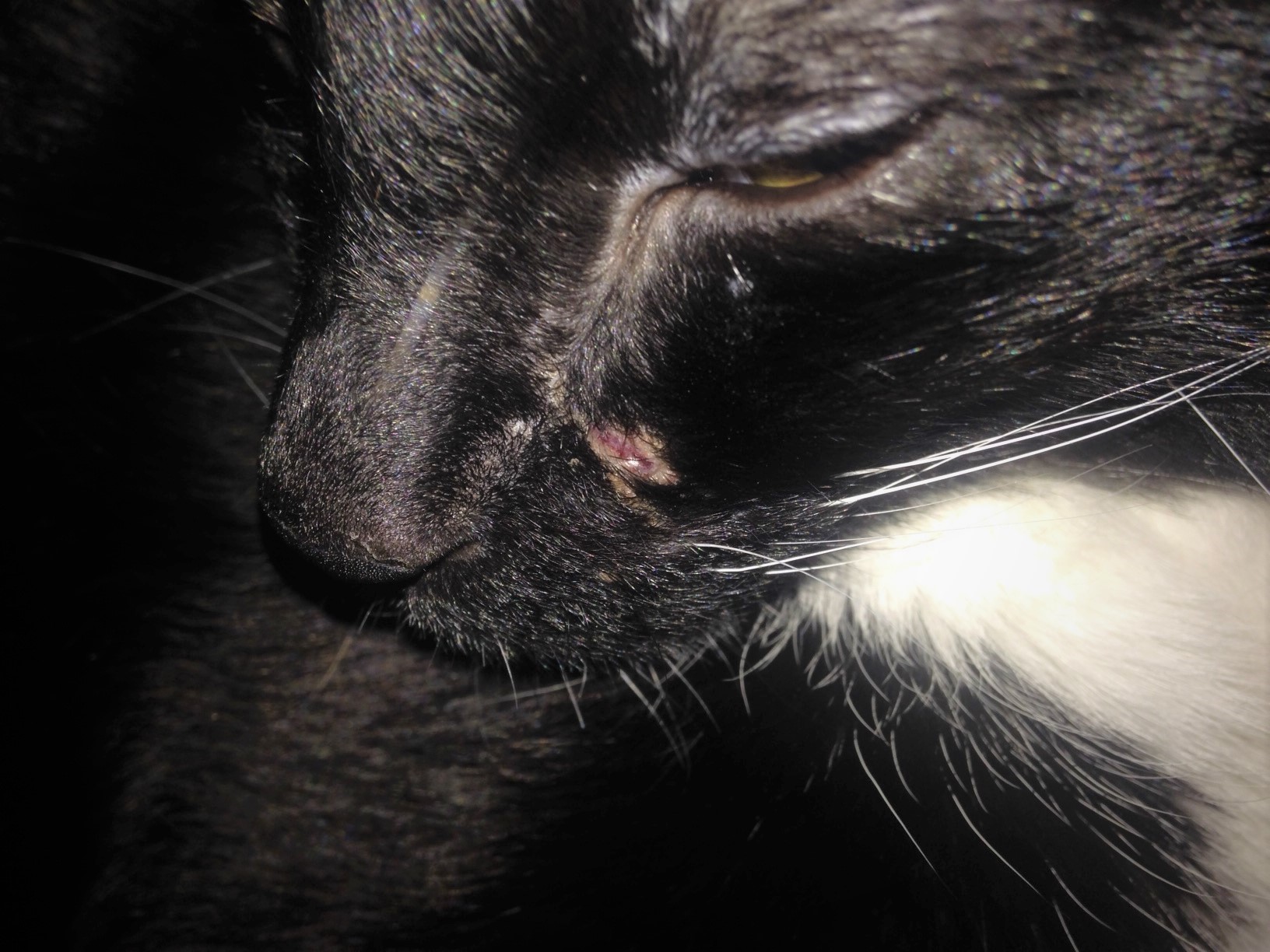 Someone needed to get inside and check on our two cats and my friend/assistant Vonnie’s two cats who stay in our guest room/Jana’s closet when she and her husband, Mike are away.  Alberta’s husband David was home that morning and the two of them are to be commended for their quick response to check on the well being of all four fur babies.

The tree had fallen on the side of the house where the electrical wires came in.  The visiting cats were in the front room and although I could not conceive of them getting out through the hole from the tree, we were sure they needed to be moved to a safer place in the house before any tree removal work started.

David wrangled the little furry guys out of the front guest room/Jana’s closet and into a safer part of the house.  They were unharmed, save for one little cut, but very spooked. We will never know how Vonnie’s little tuxedo tabby, Jimbo, got his nose scraped up, be it the room falling down upon him, or fleeing face first into something in the room because the room was falling down upon him.  He is not willing to talk about it no matter how many times we have asked.

Luckily, David took some amazing photos inside and out. This has become especially important since by the time we got home from the airport the next afternoon, the tree was completely off the house, thanks to the city of Los Angeles 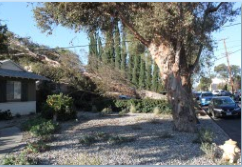 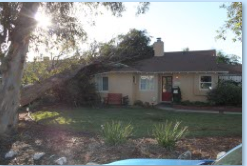 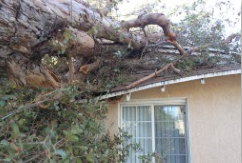 Realizing that the electrical was surely involved, our first responders called the Fire Department and the insurance company. I think the electricity was turned off by the city for a while until the tree was off the house. Either the insurance company or the Fire Department must have called the city as they were taking the tree off the house by Tuesday night. It had fallen in the wee hours of Tuesday morning.  We returned Wednesday.

What happened next?  TUNE IN NEXT EPISODE: THEN THIS HAPPENED …